“Let sleeping dogs lie”, sage advice from someone who was/is very wise.  I wasn’t sure what the exact meaning of this was when it came to dogs.  I did know that when you have a baby and it is sleeping, even after nap time is over, you should still let them sleep.  I mean, why not?

Well, this is a  tail, and not for the faint at heart.  It is a lesson learned, by yours truly and I am going to pass on some advice to perhaps save you the embarrassment, hassle and pain that I experienced 2 days before Christmas.

My brother-in-law (Chris) and sister-in-law (Jane) invited Jim’s whole family (16 of us in attendance) for a pre-Christmas open house.  It had been several years since we had been invited over, not because we are bad people, or because they haven’t wanted us over…. I am really not sure why actually, but in any case, it just hadn’t happened.

Chris and Jane live in the East Bay (San Francisco) in a lovely home.  It is small in size but BIG in style.  Jane is an interior designer and her house is worthy of a 16 page spread in Home and Garden or In Style.  In a word, stunning.  Before crossing the threshold of their home you are greeted by a small koi pond, with a tiny rustling waterfall.  Upon entering the home there is a mystical blend of “spa” music and the comforting smell of something cooking on the stove that both relaxes and comforts you, giving you a feeling that you never want to leave!!!!

Jim, the boys and I were the first to arrive.  So we actually were there before the other 12 family members arrived.  Chris and Jane’s Springer Spaniel “Cooper” greeted us, smelling and licking our hands and all seemed Great.  Cooper is about 13 years old and deaf.  He is cute, but doesn’t have all his faculties. 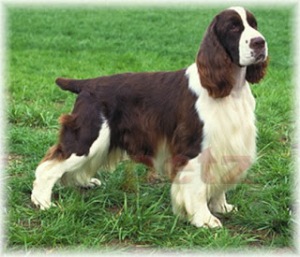 Soon, the rest of the family arrived.  16 people smooshed into Chris and Jane’s house is very tight, but we happily made it work.  Dinner was amazing!  There was flat bread pizza, crab  chowder, salad and an unbelievable cranberry bread pudding.  Yummy!

I was clearing dishes from the table, bringing them into Jane (who was washing), when IT happened.  On my trip back from the kitchen, I knelt down to pat Cooper on the head. His  shiny silky black and white coat was so inviting with his body on its side fitting head to toe on a taupe area rug just outside of the kitchen.  I couldn’t resist.  The second that my hand met his head he quickly jumped up swallowing my hand into his mouth.  Wow!  So unexpected.  I saw the whites of his chocolate-brown eyes, and I saw the crazy in his eyes.  The more I tried to pull my hand out, the more of my hand disappeared into his mouth.  Funny as it seems, I was embarrassed, I felt as if I had done something wrong, I single-handedly ruined a lovely family evening.  I quietly tried, and failed to exhume my hand from his jaw.  I really didn’t want anyone to know, and I stupidly thought that if I could get  my hand out I could wrap it in a few paper towels and nobody would be the wiser. 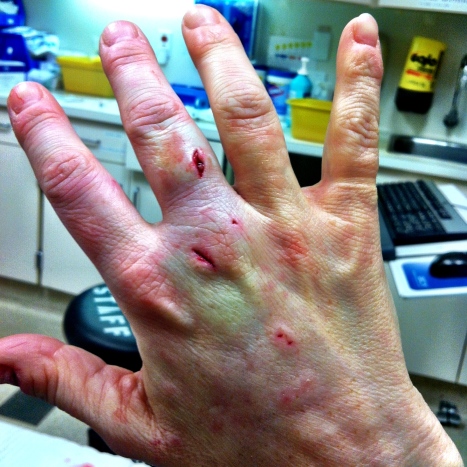 I gave in finally and called out “Can somebody help me, please?”  Imagine a small room full of very loud, tall people.  (Almost everyone in Jim’s family is tall).  No one heard me, and I didn’t want to alarm my kids, but I needed someone to save me, I hollered again, I am not sure what I said this time, but I know I was louder and they came.  Chris, Jim and Heather (Jim’s sister) came running.  Chris pried his dog’s mouth off of my hand, and Heather quickly took me over to the kitchen sink where she rinsed my hand.  My husband just kept saying “it’s really bad, really bad.” 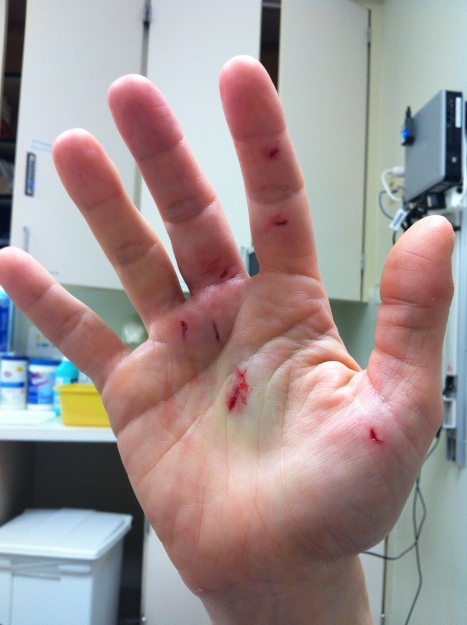 Finally Heather told Jim to “go away, you’re not helping”, and the situation calmed down.  We all assessed the situation, and decided that Jim should take me to the emergency room and the in-laws would take our kids home.

Really, after it is all said and done, it really wasn’t that bad.  I did get some stitches and antibiotics.  I also didn’t argue when the doctor offered pain killers.  I was in pain after all.

Here are some current pictures.  My hand looks red, it’s really not, just something weird with the picture. 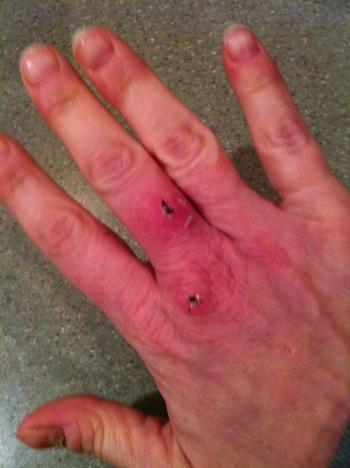 The black spots on my hand are the stitches.  These will be removed in a few days. 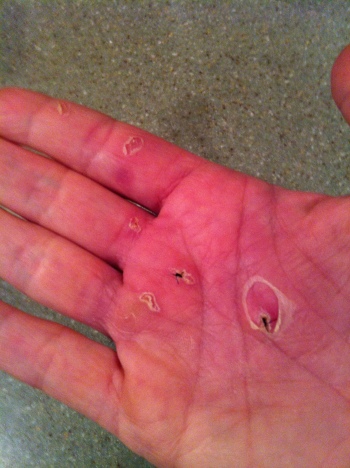